Does anyone know any new or wonderful spoilers from the Paley Event or know where one might find some? All I see is people asking not to be spoiled and implying that spoilers are everywhere, but I can't find them. :(

Hey guys! So I was one of those lucky people who went to the Bones panel at the Paley Center last night. It was wonderful of course. I always love Paley events, and I was so happy they had another panel for the show.

Despite what the website originally said, we did not see the season finale. We saw this week's episode, 5.22 - The Hole in the Heart. It was a really good episode. Emotional and intense. And it definitely leaves you wanting to see the finale right away. While the panel wouldn't confirm that we get any answers to an important B/B question in the finale, I'm hoping we do. If there's something specific you would like to know about the episode, I'm more than happy to tell you in the comments.

The panel was very entertaining as well. There was a lot of laughter. I thought Hart Hanson might fall over from laughing so hard that he was kicking his legs up. There were lots of jokes and teasing. David was very animated during some of his responses. And everyone looked great.

I want to write up some more details from the panel, but haven't had time yet today because of work. I will post as soon as I have a chance to remember all that was said. Meanwhile, there are a few sites posting information already:

FutonCritic: Video: A Few Minutes With... The Cast of Bones

And I of course took a ton of photos of everyone, so if you're like to check those out, click on this preview picture: 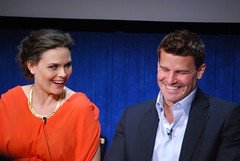